Did Tiger's Public Statement do the Job?

Welcome back!
After a pause of nearly three weeks - criss-crossing the fruited plain- and just before taking off again, your faithful media consultant has been busy....although not too busy to take in the Olympics and the latest apologia from Tiger Woods [more on that in a moment].

First, the coverage of the Olympics....it has been a joy to watch from the comfort of my home., and the occasional hotel room. The problems with the Opening Ceremonies was somewhat overblown. I admit to falling asleep about two-thirds of the way through. I rarely find such broadcasts all that interesting. The fact that it was not bilingual has upset some people in Canada. The fact that it did little to celebrate Canada's English and French founding nations received somewhat less criticism. The British media have been - as usual - harshly critical of the entire Olympics. But who cares? They're Fleet Street, right? That's what they do. They're no doubt sharpening their claws for the 2012 Summer Olympics in London.

I have been very impressed with CTV's coverage. As the host broadcaster of the Olympics, the network has demonstrated a solid performance, with intelligent commentary and featuring the always reliable Brian Williams. NBC too, with veteran Bob Costas front and center has been excellent in its coverage as well.

NBC's Today show needed to get its act together, however. Meredith Viera's mixing up Michael J. Fox with Terry Fox was somewhat awkward and embarrassing. Maybe it was the early hour that triggered this gaffe:
http://www.youtube.com/watch?v=nBP2gOKPP8I 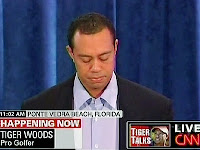 Did Tiger's Public Statement Do the Job?
Let's turn to Tiger Woods. Did his choreographed appearance do what he needed it to do? Well, that depends on what his goal was. If it was to put an end to the crisis, he didn't do it. If it was to turn the corner on the issue, then, perhaps it was helpful.

Could he have done something different? Uh, yes as a matter of fact, he could indeed have brought the story in for a landing - finishing it and turning his attention to his recovery and his successful re-entry to the PGA Tour.

Why didn't his public statement do what it needed to do?

The simplest answer is that he still hasn't responded to one reporter's question. His well-rehearsed speech was just that. A speech, rather than a news conference. Why did it have to be? He has avoided the media from the beginning, never meeting with or answering reporters' questions, so we are still left to wonder about some of the essential elements of the story. Although he did his best to push back on the rumors about Elin's role in the accident, and about the allegations of performance-enhancing drugs, many rumors will remain until he submits himself to some tough questioning.

In terms of performance, it was well written and delivered, if somewhat robotically. I do believe he was sincere. Although, one is still left to wonder, are these his words? Quite possibly. However, any question about the authorship could have been taken care of with spontaneous responses to reporters' questions.
The fact that his main camera went out half way through left him no camera to look into. However, the secondary camera aimed at his mom and the rest of the audience, saved the day.

So what would a true news conference have done for him?
First, it would serve as his final words on the entire matter, thus clearing the way for his return to golf when his treatment is over.
Second, it would have put this burden behind him, thus lifting the burden he has no doubt had on his shoulders.
Third, it would eliminate any of the lingering question, 'what is he afraid of'?

Returning to a 'Life of Integrity'

So, it wasn't the end of the long journey back, but it was a signpost on that road. He has shown his face, he has reiterated his apologies to his wife, family, friends, business partner, sponsors, and to the millions of young fans for whom he has been a role model.  He has made it clear that he does have values, told us in no uncertain terms that he had done it because he felt 'entitled' due to his money and fame. He admitted that he had brought the shame onto himself. Those were all good things, to be sure. It may put a halt to the slide in corporate endorsements and given hope to his Foundation's staff that his commitment to the Foundation continues. [Although he made have laid his Foundation work on a bit thick, but it's forgivable in the circumstances.]

So, I give him a solid 'C' if a report card would be appropriate. Tiger's journey to full recovery - not just personally, but professionally - continues and I, along with many others, certainly wish him and his family well.

Now it's Toyota's turn to try to recover...stay tuned for next week's Congressional testimony by Toyota execs!

Posted by Barry at 8:52 PM 2 comments: Links to this post

Some further thoughts on Crises from Fort Worth

Quick updates....
Here I am in Fort Worth, Texas having just completed a Crisis Communications seminar, so crises are on my mind. I'm relaxing by enjoying the fireworks between Republican Gubernatorial campaign rivals, Kay Bailey Hutchison and Rick Perry. It's so nasty I thought I was back in Canada!


As I was saying about Toyota.... Jane Taber at the Globe and Mail called and...
http://www.theglobeandmail.com/blogs/bureau-blog/how-not-to-manage-a-crisis/article1452440/

We're going to have to update those credits one day but they're confidential, know-what-I'm-sayin'?
Posted by Barry at 11:47 PM No comments: Links to this post