Why People Were Drawn to Jack?


Speaking of Jack...
I was interviewed by CTV at the ceremony on August 25th in front of Parliament Hill at the end of the Lying-in-State ceremony for the late Leader of the Opposition, Jack Layton. They wanted to talk about the content of the blog posting below, Why People Were Drawn to Jack?
Welcome back.
Canadian politics lost  a phenomenal political leader, with the sad news that Jack Layton, the NDP Leader of the Opposition, passed away. As with millions of people across the country, I felt personally saddened by the loss of "the Happy Warrior". I had the privilege of knowing Jack on a personal and professional level, and although I won't get into the details, I knew him well enough to share some of my analysis of why Jack Layton was able to strike such a profound chord with so many people. Hopefully, there are lessons in there for all who contemplate or practice the art of politics. 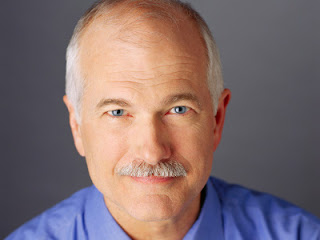 Why People Were Drawn to Jack?
1. Jack had a positive vision. He was able to foresee and articulate a future in clear and compelling terms that he felt deeply and authentically would be a better world than what we have today. He shared that vision in every way, every day.
2. Jack felt that politics could be a noble calling and he was never apologetic about being a politician. I had the privilege of knowing and working with his late father, Bob, early in my career and Bob's zest for life was so obviously passed on to his son - and I am sure - to his children. We would occasionally joke about the fact that he was a conservative while his son was a socialist, but that was never a barrier in the love that the two men shared for each other. At the same time, although he was a strong leader, he knew that he could only succeed through igniting a passion for citizen involvement among youth and others who had felt marginalized.
3. Some might say he was a 'dreamer', but he was very much a realist. An optimistic one, absolutely, but a realist nonetheless. He was strategic in his thinking, disciplined in his actions and determined in the face of sometimes frightening odds - both politically - and as we all witnessed on the campaign trail earlier this year - profoundly personal - yet determined to see it through. As Canadians saw him hobbling along on the campaign trail, he turned his cane into a metaphor for a gutsy fighter speaking out for ordinary Canadians against the odds.
4. Jack drew energy from people. Some might have cast him as a 'showboat' with his penchant for colorful outfits and stunts that got him coverage, but that was part of his zest for life and his love of people as much as it was for the political benefit those events may have garnered him and his party.
5. Jack was an extremely considerate and thoughtful man and people loved him for those qualities. Earlier this year I asked him if he would kindly write a letter of reference for me for a particular project, and his letter could not have been more gracious - if too kind. But I will treasure that always.
Canada Says Goodbye
Prime Minister Harper, although a long-time political foe of Jack Layton's clearly had a special relationship with him, and his personal comments, topped off by his ordering of a state funeral for him was so obviously the right thing to do and fully in keeping with Canadians' fondness for Jack. The overall response to his passing has been marked with the special grace that Jack radiated since he was diagnosed last year with cancer, and his subsequent broken hip. The last time I spoke with him - after the election - we were doing TV interviews up on the Hill on different networks, but at the same time. After a laugh or two about that, I thanked him for his gracious letter on my behalf, and those blue eyes looked right into mine and he said, "I meant every word of it."
Trust me, there are very few people in politics who would ever bother to say such a thing, but that was what drew people to Jack.  He passed that grace on this week to all Canadians who have come together across the political divides in every part of Canada to bid bon voyage to a singular man who left us a great legacy. Although it's not the end of partisanship, it could be a big step towards civility in politics.

Let's leave it with this poster taken from Jack's last letter to Canadians written two days before his death. Until next time.... 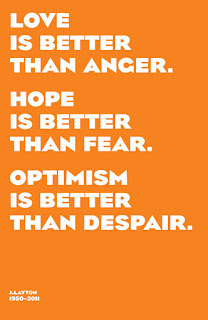 Posted by Barry at 10:41 PM No comments: Links to this post

5 Tips for Communicating in Difficult Times

The global financial markets have once again sent shock waves to businesses and governments around the world, raising anxiety levels once again while driving down consumer confidence. Now is the time to strengthen the strategic communications of one's organization, rather than running away from it. Here are five tips I would offer to respond to this latest economic storm.
5 TIPS FOR COMMUNICATING IN DIFFICULT TIMES
1. Revise and develop a focused communications strategy. That means touching base with your customers and stakeholders to understand their priorities and concerns.
2. Develop your strategy for reaching them with a unique selling proposition that fits their goals. All strategies need to be revisited on a regular basis. What worked in good times, may be just the wrong strategy for difficult or uncertain times.
3. Tailor your message. Ensure that your message isn't about 'you' but about 'them'. In a tightened environment, with declining share value,make sure that your messages offer solutions to your clients.
4. Be proactive. Through social media, earned media opportunities, special events, customer appreciation initiatives and focused advertising, step up your efforts to connect with your marketplace and community of interests. Remember, a lot of your competitors will be lowering their profile, so consider this a heightened opportunity to get before your customers.
5. Prepare the way. You have to till the ground before seeding it. So, get your communications planning nailed down, train your spokespeople in media interviews to benefit from that earned media, and train your executives and sales force in powerful customer presentations. And then...... get out there!

This is the time to be at your best and to sell your solutions to your customers.  Even if you have to work twice as hard to get half as much, a market shake-up such as this could be the proverbial ‘buying opportunity’ for your company and your services!

Until next time....keep an optimistic mindset. Your positive energy will be a tonic for difficult times.
Posted by Barry at 2:09 PM No comments: Links to this post