The Discipline of Politics

Welcome back!
It's been a month since we last got together.  It's been an insane travel period - with seminars from Toronto to Newfoundland to Alberta to Los Angeles and Washington in the last few days. 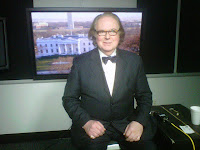 I managed to sneak in an interview while in Washington on Don Martin's PowerPlay on CTV. In that segment, I joined pollster Nik Nanos to talk about the Conservative Government's handling of the 'Robocalls' controversy [in which a number of identified Liberal supporters in several ridings were called by someone purporting to be from Elections Canada on election day and told that their polling locations had been changed].
My essential point there is that the Harper government has to keep their cool on the allegations, let Elections Canada do its work, and if individuals have violated the law, there is a legal system that takes care of those things. In the Strategic Communications class that Laura and I teach in the Riddell Graduate Program class at Carleton, our students have been given an assignment this week focused on how to handle that issue. We're looking forward to reading their strategies.
The government needs to get back to the issue that Canadians care about...and one that Republican candidates need to remember... "It's the Economy Stupid!" [Even though it was Democrat James Carville's slogan for Bill Clinton's 1992 campaign, it is even more relevant today for all governments and Parties.]
Romney Inches (Painfully) Towards the Nomination
The Republican primaries grind on, with Super Tuesday underscoring the difficulty Mitt Romney is facing as he inches towards the nomination. With six wins chalked up on Super Tuesday to Rick Santorum's three wins, you'd think he would be able to breathe easier. But nooooo!
Romney managed to squeeze out a crucial win in Ohio. If he had lost that - combined with his losses to Santorum in Tennessee, Oklahoma and South Dakota, the tide would have begun to turn. What's keeping him in the lead is his (or his Super PAC's) ability to outspend his rivals 4-to1 or 5-to-1 in ad buys denouncing Rick and Newt. It's the classic strategy known as "you may not love me but I hope you'll hate my enemy just a little more."
Ducking the Limbaugh Fall Out
Poor Mitt is so shaky in his relationship with the deeply Conservative wing of the Party that he couldn't bring himself to rebuke Rush Limbaugh for his verbal assault on Sandra Fluke, a 30 year old Georgetown University law student in her testimony to a Congressional panel. A golden moment to define his character and he ducked - merely saying that he would have used "different words". Rush lost his hearing several years ago (and now only seems to listen to himself) while Romney seems to be tone deaf. Having had candidates who share that trait, I recognize it well. For some reason they can't hear themselves the way the audience hears them. It's a real deficit in politics as not every comment can be cleared before they're said. So one relies on the candidates own abilities to edit themselves as they go.
Romney should take a page from Massachusetts Republican Senator Scott Brown who  tweeted that Limbaugh's remarks were "reprehensible". These golden moments to define one's character only show up occasionally and candidates have to recognize them for what they are - a chance to show some character.
Santorum Hangs in There...in Spite of Himself
Which brings me to Rick Santorum. He has certainly exceeded all expectations as his candidacy took off in January but he has hurt himself since then with damaging comments, such as his Michigan debate where he admitted that his support for George W. Bush's 'No Child Left Behind' was because ' sometimes in politics you have to take one for the team". Also his characterization of JFK's 'separation of Church and State' speech - that it made him "want to puke" was over the top. Although he later recanted  it on the Laura Ingraham show, his immediate defense of it on network television cemented the error. There is a place for nuance in politics but that was not a shining example of it. He's got to figure that some of those unforced errors took him completely off-message on the economy - which lost him Michigan and later, Ohio.

The difference between winning and losing candidates? All other things being equal, it's 'discipline'.