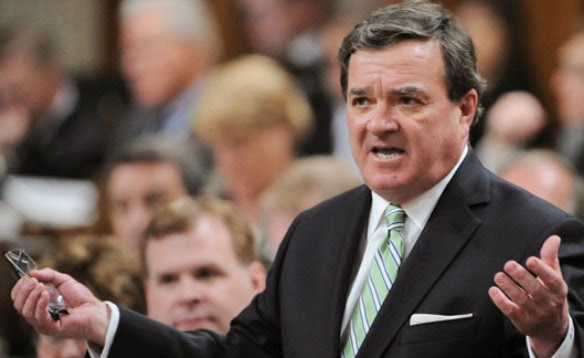 'Jimmy, we hardly knew ye'
This post is devoted to Jim Flaherty whose State Funeral was broadcast earlier today. Laura and I were working in Los Angeles traveling when our son Brendan phoned us with the shocking news of his death last Thursday.  Although we've been in Winnipeg the past few days,  we were able to make it back home just in time to catch the broadcast. While flying home, I thought back over the Jim Flaherty that I knew.
Jim's gift of friendship
Jim had the gift of friendship and there were many more who had deeper, long-lasting friendships with him, than I. However, being in the business of media training and coaching, I had the privilege of working with Jim Flaherty in his various Cabinet portfolios provincially, as well as his first leadership run. Several years later, as Finance Minister he came to me to prepare him prior to the delivery of his first Budget Speech. In between, Laura and I would bump into him on many different occasions and we always enjoyed our conversations.
The last time I spoke with him
Being Irish-born, I found it easy to strike a rapport with him - a friendship which stayed true all the way through, including the last time we chatted a few weeks ago. It was after Sunday Mass at Notre Dame Cathedral and as Laura and I introduced to him our young adult children - Caroline, Brendan and Liam, we all joked about our shared propensity for Irish names. That triggered the rest of the conversation that was mostly about his three sons - Galen, Quinn and John. He positively glowed as he spoke of them. Although he clearly looked like he was struggling with his health, he was as hard-working as ever. In fact, he was on his way to the office to put the final touches on his Budget Speech - the last one he was to deliver, only a day later. When he resigned from Cabinet a few weeks later, we all thought that now he would be able to take the time to rest and get his health back. Tragically, it was not to be.
Jim 'slips away to the next room' 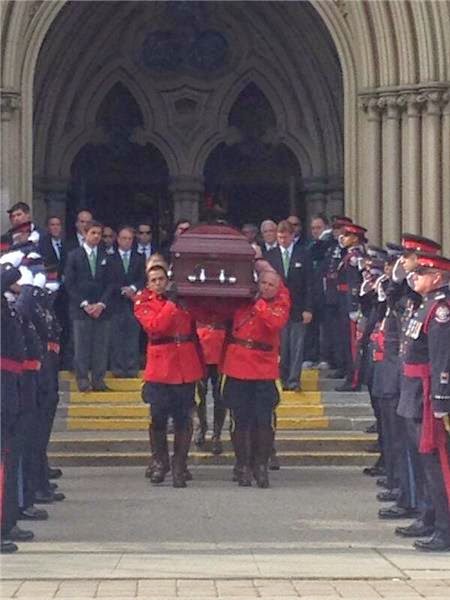 The State Funeral - with everyone wearing green ties and scarves in his honour - was a great tribute to Jim, as he was one of the most significant Finance Ministers in history. Prime Minister Harper did a superb job of capturing - with humour and emotion - both the tender side and the tough, determined side of Jim Flaherty. He revealed his own feelings as he addressed Jim's three sons, Galen, John and Quinn, about how he dealt with the loss of his own father eleven years ago. It was a very meaningful comment from a Prime Minister who doesn't often reveal his own personal feelings. Jim's family were remarkable in their poise and their tributes, that gave us insight into his role as a devoted father and a husband. Quinn's message to his father was both humorous and touching: "Put your feet up. Lay your head back. Close your eyes and relax. We will take it from here." And they did!
His wife Christine Elliott, M.P.P., in one of the most unimaginably difficult things to do, gave a wonderful tribute, including these lines from the ballad, Death is Nothing at All, by Henry Scott Holland:
"Death is nothing at all.I have only slipped away to the next room.I am I and you are you.Whatever we were to each other, That, we still are.Call me by my old familiar name.Speak to me in the easy waywhich you always used.Put no difference into your tone.Wear no forced air of solemnity or sorrow.Laugh as we always laughedat the little jokes we enjoyed together.Play, smile, think of me. Pray for me.Let my name be ever the household wordthat it always was.Let it be spoken without effect.Without the trace of a shadow on it."

His sister Norah, in her funny but profound tribute, revealed that his siblings and parents always called him 'Jimmy'.
Jimmy we hardly knew ye
The Irish song, "Johnny I Hardly Knew Ye" was used as the title of a book by Kenneth O'Donnell and Dave Powers about their boss, John F. Kennedy, that is a wistful way of saying, 'I'd wished we'd spent more time getting to know you'. That would capture how most people who knew him would feel about 'Jimmy' Flaherty.

On a personal level, what will be left behind was the memory of his laughter and deft wit - sardonic, self-deprecatory and playful - that left one feeling better about life and the world. He told more with his eyes than with his words at times. Helpful, in the sound-bite world inhabited by a Cabinet Minister whose every word is measured by the markets.

Something else stays with me in his personal story.  While he was a Princeton student, Jim supported himself by driving a cab and bussing tables. I think that tells us a lot about his character and his ability to understand the realities of people's lives, and of those who need a 'hand up' [as illustrated by The Abilities Centre he created in his beloved hometown of Whitby].

His most significant contribution, of course, was his handling of the October 2008 economic meltdown, and the actions that he took - in concert with the Prime Minister and the Governor of the Bank of Canada, Mark Carney - to save the jobs of hundreds of thousands of Canadians and to ensure the continued flow of money in the economy.

As we saw in the State Funeral and in all the tributes that were shared in the days following his death, was how he was able to maintain personal friendships and respect across the aisle. Even though he had a partisan streak in him and could fight fiercely for what he believed, he had the gifts of friendship and empathy and was able to develop friendships with politicians of every stripe. We need more Jim Flahertys'!

So, to adapt a toast from one of my favourite movies, 'Waking Ned Devine',
"Take a drink and remember the man. And raise your spirits to the sky. Raise them to Jim Flaherty. God bless you Jim, and may we be forever in your debt."

Jimmy, we hardly knew ye!
Posted by Barry at 9:44 PM No comments: Links to this post

6 Rules for Managing a Scandal

Welcome back! It's been a whirlwind time at McLoughlin Media as we celebrate our 30th anniversary in April. Laura and I have been traveling from New York (media training); to L.A. (message development); to Montreal (media training); and Toronto (presentation skills). Earlier this week I was in beautiful St. Louis doing a seminar in crisis communications. So life has been busy.

Just yesterday, we completed the term for our course, 'Political Management and the Media' in the Clayton H. Riddell Masters of Political Management program at Carleton University. Once again, a great group of students who represent the political spectrum and who are an inspiration for the future of politics.

On April 7th Laura and I will be attending the Women in Communications and Technology Awards Gala at the Westin Hotel in Ottawa where Laura will be receiving the Communications Excellence Award. Congratulations Laura!

After that, Laura and I are back in L.A. where we are on a panel discussion at the Spring Meeting of the American Bar Association, April 11th, called "Scandal Scarred: Managing Your Clients Through a Political or Government Scandal.  We're looking forward to it.

Which brings me to my topic of this post....

Six Rules for Managing a Scandal
Over the past thirty years, we have consulted on behalf of clients in the political, corporate, government and non-profit sectors. Here are some rules for managing scandals.
1. Make sure your client doesn't become a joke. This week's outrage was that Mayor Ford had to stand up and change two votes - in which he had voted AGAINST Council congratulating Canada's Olympic and Para-Olympian teams, and AGAINST naming a street after Nelson Mandela. Jimmy Kimmell had another field day with that piece of news, and even Bill Clinton weighed in [ironic isn't it?] Interestingly enough, it looks like Rob Ford will probably avoid criminal charges for his actions, but will it save his political future? Right now, it's even odds that he could pull off a victory in October against John Tory and Olivia Chow, as they seem determined not to bring up the Mayor's ahem peccadillos.
2. Don't bring in people who are 'toxic' to manage other people.
The antics of Conservative MP Eve Adams and her fiancé, Conservative Party Executive Director Dimitri Soudas have tripped up Prime Minister Harper's efforts to shake loose last year's Senate 'Scandal'. Now that Mr. Soudas has been let go, there isn't anyone in his camp willing to defend him.

3. Turn the channel. Mr. Harper's strongest suit as Prime Minister was on show last week as his visit to Ukraine, Germany and the G7 in Brussels showed him to be resolute in his stance for justice and call to action on Putin's take-over of Crimea. However, when he arrived home to the swirling controversy over the Dimitri Soudas-Eve Adams side-show, he must have been furious that he couldn't spend one day basking in the success of his European trip.


4. Style of leadership matters. The resignation of Alberta Premier Alison Redford underscores the importance of leading by listening and motivating - not by command and control. A government requires a team. It is not a one-person power machine. No matter the progress she was making in Alberta's economy and development, her style began to grate - first internally, and then with the public.


5. Understand and respect your own brand. Every successful government understands its brand - that is, it's promise to voters. New Jersey Governor Chris Christie still hasn't recovered the damage to his 'just folks, man of the people' brand as a result of the 'Bridge' scandal. In Canada, for three elections, the Conservative brand was powerfully and persuasively built, but it has eroded badly since the last election - on political reform, the military, veterans and even solid management. The Conservatives have only 18 months to re-discover their brand and get off the defensive. 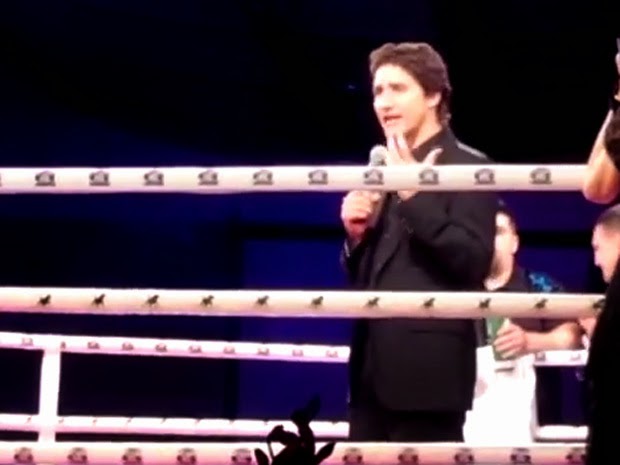 6. Make sure your message hits the target. The government's 'Canada's Economic Advantage' campaign is long in the tooth and has lost its ability to move the dial. The party's 'He's in way over his head' personal attack ads on Justin Trudeau seem weirdly personal (clips of him removing his shirt) and not serious.  Justin Trudeau's F-bomb at a charity boxing match last week, followed by his cursing on television last night won't cause permanent damage. However, it does play into the counter-narrative that the Conservatives have proven so adept at creating - with former Liberal leaders Stephane Dion and Michael Ignatieff. Will lightning strike three times? Although Mr. Trudeau seems to have a teflon coating, the Conservatives are betting heavily that the attacks will start to stick.

So those are only some of the rules for managing a scandal. But they're a start!

Until next time......welcome to spring!