It's never too late to do the right thing

Welcome back!
So much has gone on in the past two weeks since my last blog post - from the nightmare of Syria to the ongoing soap opera of some Canadian Senators to the terrible tragedy at the U.S. Navy Yard in Washington DC, the news has been troubling to say the least.
Costa Concordia - Righting the Ship
One cause for celebration amidst these depressing scenarios is the raising of the Costa Concordia off the coast of Italy nearly two years after its sinking. A true feat of engineering and determination, the successful righting of the ship is a hopeful salve to an upsetting time.
Syria and the Obama Administration

Much has been written about the on-again, off-again threats against Syrian poison gas sites by President Obama and Sec. of State John Kerry; the mixed messages; the after-the-fact (sure-to-fail) attempt to garner Congressional support. The ultimate embarrassment was the emergence of Vladimir Putin as a 'peace-maker' in a negotiated deal between Russia and the U.S. to remove those weapons of mass destruction. What are some lessons out of this messy situation?

Five Key Lessons from Syria
1. The U.S. President was conflicted in his roles. His initial instinct was to strike hard and fast as Assad had clearly crossed the 'red line' that the President drew long ago. Once the President announced that he would strike militarily, he had painted himself into a corner. U.K's Prime Minister David Cameron found himself in the same dilemma when the House of Commons voted against him. That clearly had an impact on the President.

2. The process was not well managed. In the Cuban Missile Crisis, Kennedy brought the nation together, shared with them what they had discovered (Russian missiles in Cuba), and put in place a blockade with a clear warning to the Russians. He didn't threaten - or strike - even though he was strongly advised to by his military advisers. He used back-channel communications between Bobby and  the Russian Ambassador to find a peaceful solution. In this case, the President and the Secretary of State seemed to be on different channels - and all of it live on CNN.
3. Don't ask what you know you won't get. The public is tired and cynical - and Congress is no mood to risk political capital on this issue - the only thing to unite both parties. Even though the U.N. inspectors have now confirmed that Assad did indeed use poison gas on innocent people, the public still cannot be galvanized into action. After Iraq, Afghanistan, and Libya, they just don't want to go there anymore.

4. The Value of Delay. While waiting for Congress to get its act together, John Kerry blurts out a response at a news conference that changes the entire direction of the issue. This opened the door for Putin to step in and offering to intercede with Assad. With that delay came the path to a peaceful solution. [Although how to punish Assad still remains a source of deep discord between Obama and Putin.]

5. Can Obama 'Right the Ship'? Yes, so long as he learns the lessons out of this situation, Americans may thank him from keeping them out of direct military involvement. He has proven time and again his ability to recover and he only has a year left before the mid-terms to demonstrate his bona fides internationally. After all, he won the Nobel Peace Prize shortly after being elected. Who knows, maybe he could win it again?
How to End the Senate 'Scandals'
The Canadian people have clearly made their minds up about the four Senators at the centre of the 'scandal' involving expense claims and housing allowances. They have become so turned off that the majority want to end the Senate altogether. [Personally, I think that would be an over-reaction and a real shame. A reformed Senate could be a major step forward in bringing more accountability and a more vigorous democracy in Canada. But that's a subject for another day.]
In this post, we are looking at the issue of the spending scandals and what it will take to end the reality series that threatens to be renewed for another season. So far, Sen. Mac Harb has paid back the money and resigned. Notice how quickly he is out of the limelight? What should Senators Duffy, Wallin and Brazeau do?
How to End the Senate 'Scandal'? 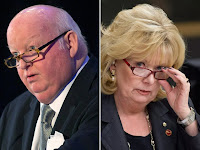 First, Senators Duffy, Brazeau and Wallin need to do the right thing....and resign. Without a resignation, they will continue to draw heat - not only onto themselves, but more importantly, the entire Senate, let alone the Harper government. They have violated the rules, and Canadians expect that there should be consequences. Just paying back the money doesn't do it. Notice how Sen. Mac Harb has already disappeared off the radar screen since his resignation?
Secondly, the Senators need to apologize fully and unreservedly for their actions. No excuses, no blame, no attacks. Without it, the outrage only continues.
Thirdly, the Harper government needs to move forward on a refreshed agenda. They need to demonstrate that they are not captives of the issue. That will be difficult, as the Opposition is already demonstrating with yesterday's 'Twitter Question Period' that they intend to keep adding heat. Stephen Harper is out there doing what Prime Ministers can do - namely, make news. His performance at the G20 was strong, and on issues such as Child Protection and Syria (while staying out of it, he has communicated his profound disgust for what the Syrian government has done. Canadians seem happy with his response so far.)

Remember, even if things have not been well handled, it's never too late to do the right thing.

Managing Perceptions and Expectations
Welcome back...
Canadian Politicos 'Fess up to Smoking Dope
Canada seems transfixed by whether their political representatives have smoked dope, how much and when. Now that Liberal Leader Justin Trudeau has pronounced himself in favour of legalizing the sale of marijuana, it was inevitable that he would be asked about his own use of it. He surprised the public by his admission of having smoked it as recently as a few years ago - while sitting as an MP. The media immediately quizzed every politician they could - ranging from Premiers to Mayors [Rob Ford's admission to having smoked 'lots of pot' was not reassuring]. Prime Minister Harper replied at a news conference, "do I look like I've smoked marijuana?" Then he used the opportunity to attack Trudeau and the Liberals as promoting marijuana use while he is focused on the economy and jobs. That is the script formula for the next two years leading up to the election. Justin Trudeau is banking on his marijuana 'positioning' as part of his narrative attractive to youth and positioning his party as a clear alternative to the status quo. His target on this one is to pull away potential NDP Mulcair supporters, who is in favour of decriminalization - not legalization.
Obama Rolls the Dice on Syria with Congress
Meanwhile the world awaits what will transpire in Syria. President Obama built up expectations that the U.S. would launch imminent military action against the Syrian government to "suffer consequences" for their use of sarin gas against hundreds of innocent civilians and children. However, President Obama pulled up short and threw the issue to Congress for approval on the heels of the British House of Commons' voting down Prime Minister David Cameron's intention to join the President. It also forced the only other world leader - France's François Hollande - to 'consult' with the French National Assembly as well. [Incidentally, you've got to hand it to France, in one deft move, President Hollande has secured a strong relationship with Obama. After all, he was right there with him from the outset. Those chips can be cashed in somewhere down the road when France is looking for support from the Obama Administration.]
The President feels he can win the support of the House and Senate and his concerted effort to secure the support of Senators John McCain and Lindsay Graham appears to have paid off. The two Senators emerged from their White House meeting to urge their fellow Republicans to back the President. The big issue will be the Tea Party Republicans who see an opportunity to paint Obama as a weakened President by denying him the support he needs. At the same time, they can claim that they are acting consistently on their belief that America should stay out of such military actions.
Perception of the President will Rise or Fall on the vote
The perception of the President as a strong, principled leader will rise or fall on the vote - particularly in the House - where the outcome is uncertain. If he loses the vote, his brand will take a strong hit. He has indicated that he may proceed regardless of the Congressional vote, but that would fly in the face of his strong stand in 2008 when candidate Obama told the Boston Globe, “the President does not have the power, under the constitution, to unilaterally authorize a military attack in a situation that does not involve stopping an actual or imminent threat to the nation.” He did, however, take unilateral military action against Libya in 2011 but that cost him political support among Democrats.
Therefore, he needs to gain Congressional backing this time to maintain his support among Democrats and to strengthen his hand - especially if the Syrian strike does not work out the way he would want. If he does gain Congressional support, he will be strengthened in the perception of him as a leader. Next time, though, he'll have to manage the expectations of the American public in a more strategic way.
The Perception of Vladimir Putin
And what - if anything - will be said at the G20 in St. Petersburg about the Russian government's legislation concerning the anti-gay legislation passed by the Russian Duma? Probably nothing formally, but Prime Minister Harper's spokesperson, Andrew MacDougall, has said that the Prime Minister may bring up the issue with Putin on a one-on-one basis.

The carefully managed perception of  Vladimir Putin - President for Life of Russia is one of macho man staring down leopards and riding bareback. [Those photos bring to mind the Chinese government claiming that Chairman Mao swan the Yangtze River.] His pushing of the laws restricting the public from 'promoting' the gay lifestyle runs no risk for him domestically, but promises to create problems for the Sochi Olympics. Although the International Olympic Committee can reliably be expected to do nothing, the world's athletes seem determined to show their strong disagreement. More to come on that issue, as we get closer to the Olympics.