Obama is here.....govern yourselves accordingly! 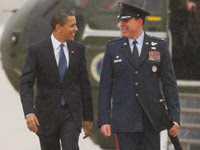 Today (February 19th) the President has dropped into Ottawa on his first foreign visit and I must say it's a real--oh sorry he's gone. I hope you enjoyed it!
A lot of people in the capital of the Great White North are disappointed that President Obama is having such a short visit. What about skating on the canal? Eating Beavertails (a local delicacy)? Watching a Senators' hockey game? Ahhh gee, eh?

It's important to put this into perspective. That's the great thing about the Canada-U.S. relationship - our closeness. The President can leave after breakfast. Heck he can even whip home for lunch; go back again and be home by supper! Now what other nation can claim that?

The economy is on everyone's mind and with the passage in Congress of the stimulus/reinvestment package and in Canada, with the passage of the Budget how are the media handling the coverage? Also, all around us politicians, athletes, bankers and others are apologizing for their sins and asking for forgiveness. Some work out and some don't. In this edition, we'll examine why.

But first a little catch-up on what's been happening since my last missive.

We were in Washington for a few days last week, and among other meetings, we attended former U.S. Ambassador David Wilkin's reception at his new law firm. He understands the cross-border issues like no one else and was a real coup for the firm of Nelson Mullins Riley & Scarborough LLP. Then who should walk in, but Sen. John McCain? It was great talking with him again. He seems at peace with himself and is clearly not looking backward but forward to more years in the Senate. When he lost the election he said he had no intention of growing a beard and moving to Europe. He just wanted to get back to work, right away.

McCain and his fellow Senators and Congressmen who attended were in the middle of negotiations on the Congressional bail-out package and Sen. McCain was clearly opposed to the amount and focus of the package.

It was also great to catch up with Canada's Ambassador, the Hon. Michael Wilson, with whom I had the pleasure of working with back when he was Minister of Finance. I didn't want to take up too much of his time as he had to work that room to argue Canada's position against the 'Buy America' clause in the package. The consensus was that although it was watered down, Canada will be inevitably affected by it - which won't help American consumers or industry, but is a great 'bone' to throw to protectionist forces.

The Psychology of Recession - Fighting

Clearly the American public is deeply split on the bail-out. It does appear that huge chunks of the spending were pent-up spending demands by Democrats in Congress. Certainly for all the talk of bi-partisanship, the process for getting that support was as important as the substance. McCain and his Republican colleagues seemed to be particularly worked up over that.

Will it work? Well, I'm no economist but.......it has the potency of perception. The President is DOING something. He's giving us HOPE. When you consider that a huge chunk of a recession is psychological, then it sometimes requires a psychological solution. Most of it will probably not create the kind of growth and jobs that have been trumpeted. However, the psychological impact may be a significant kick-start to the moribund consumer economy that is our reality. People have to be willing to reach into their wallets and SPEND. Combine that with a restored credit market and who knows?

Meanwhile in Canada, the spill-over effect of the American economic woes have triggered a much greater hit on the economy than anyone had ever expected. However, even after Canada's next two combined deficits of $64 billion the Canadian debt-to-GDP ratio will still be only half of the Americans. While there is not great comfort in that, it does keep the scale of the problem in some kind of context.

The other day I was speaking to a well-known television reporter who was agonizing about the 7.5% unemployment rate. I replied "yes that is true, but keep in mind that 92.5% of people who want a job actually have one!" I added "that will never be a news item.... details at 11:00". She was taken aback and said, "honestly I never thought of it that way." Hhhmmmm.

Final point on the economy (I promise). The media need to stop 'banging the drum' on every conceivable negative story that they can possibly report. Otherwise it will be a self-fulfilling prophesy. And hey isn't that the most satisfactory kind?

When it's not enough to just be sorry.
Recent revelations and admissions from the White House to the executive suites to the dug-out have triggered a spate of apologies from the President on down. (Although we're still waiting for (the aptly-named) Bernie Madoff to release his no-doubt-deeply-felt apologia.)

Recent apologies:
A-Roid (uh-I mean A-Rod) "I'm the one who screwed up and no one else."
Obama - "I screwed up".
Notice the importance of the phrase "screwed up"?
I mean "I made a mistake is so nineties."

And now for something completely different.....
How about these British bankers?
http://www.youtube.com/watch?v=YeJbTBX1l5Y

I don't know about you, but they were less than convincing - perhaps it was their tone, body language...but they didn't quite pull it off.

Just a quick note....Friday morning, CBC Radio's Ottawa Morning asked me to come into the studio and talk about President Obama's upcoming working visit to Ottawa.
"Why isn't it going to be a state visit? Does this mean the Harper government doesn't have enough influence with them? Will it be worth it?" I give it my best shot!
Check it out here:
CBC Ottawa - Programs - Ottawa Morning - Main: "What to expect when Barack Obama visits Ottawa"
Posted by Barry at 2:07 AM No comments:

The Prez and the Press

Welcome back.
Ah... the Inauguration was over two weeks ago and I can't believe it! The economy is still in the tank and we don't have world peace!!!! Omigod! Has President Obama let us down already?

The flame of the post-partisan spirit has already been doused in Washington and is barely hanging on in Ottawa- with the passage of the Budget.

It's been a brutal week for Mr. Obama - with the withdrawal of two major nominees over unpaid taxes [Tom Daschle and Nancy Killefer] along with the close call on the third - Timothy Geithner - who quickly paid $34,000 during the run-up to his confimation testimony and managed to survive. It's not as if we need a Treasury Secretary who pays all his taxes, right? Daschle meanwhile paid $140,000 on his confirmation journey to no avail, while poor Nancy Killefer's $900 oversight put her under.

So two questions emerge from this mess:
1. How much unpaid taxes can you get away with if seeking a major post in the Administration? I'm trying to get this straight - $30,000 is okay. $140,000 is not okay. $900 is not okay either. And the logic is...uh...yeah.
2. Could this be a new technique for governments everywhere to get people to pay their taxes? Put their name in for a nomination. Wait till the grilling begins and then the money comes rolling in!!!!

The Prez and the Press
So, as Obama-mania settles down to something approaching normalcy well-not-exactly... it's intriguing to watch some of the networks' media's approach to the President. Was it just me or did you not think that the soft-pedal approach of the 'Big Foot' Anchors - Brian Williams, Katie Couric, and Charlie Gibson were just a little too obvious?

Each of them were no doubt thrilled to be invited into the Oval Office for their "one-on-ones" with the new President. It also gave the Prez a chance to do what he does best - "take responsibility" for the appointment debacle and re-focus the issue back on the urgency of passing the stimulatus package.
Note his tone, manner and message? Hey it was just a little 'glitch'! You get the feeling that no matter what happens, it's going to be 'no drama Obama'.
This was definitely not Charlie Gibson's 'Sarah Palin interview style':
http://abcnews.go.com/Video/playerIndex?id=6798573

The day after the Inauguration, some journos seemed to be still celebrating....as in this clip from CNN's Anderson Cooper:
http://www.youtube.com/watch?v=rXF3lIZr0wE&feature=related

Was Diane Sawyer just tired? Or was she just doing too much celebrating?
http://www.youtube.com/watch?v=GrLiBp4nxyg&feature=related

Not to make too much of this, but perhaps Anderson's and Diane's tipsy 'reporting' were just the obvious manifestations of giddy journalists thrilled with the outcome? I could be wrong, but journalists need to get back to what they're supposed to be doing - objectively and professionally. The Obama Administration - and all of us - will benefit from journalists doing their job. Wouldn't you agree?

Until next time.....stay fair and objective, and for heaven's sake, watch those 'glitches'! At least - go easy on the booze!
Barry
Posted by Barry at 11:31 PM No comments: